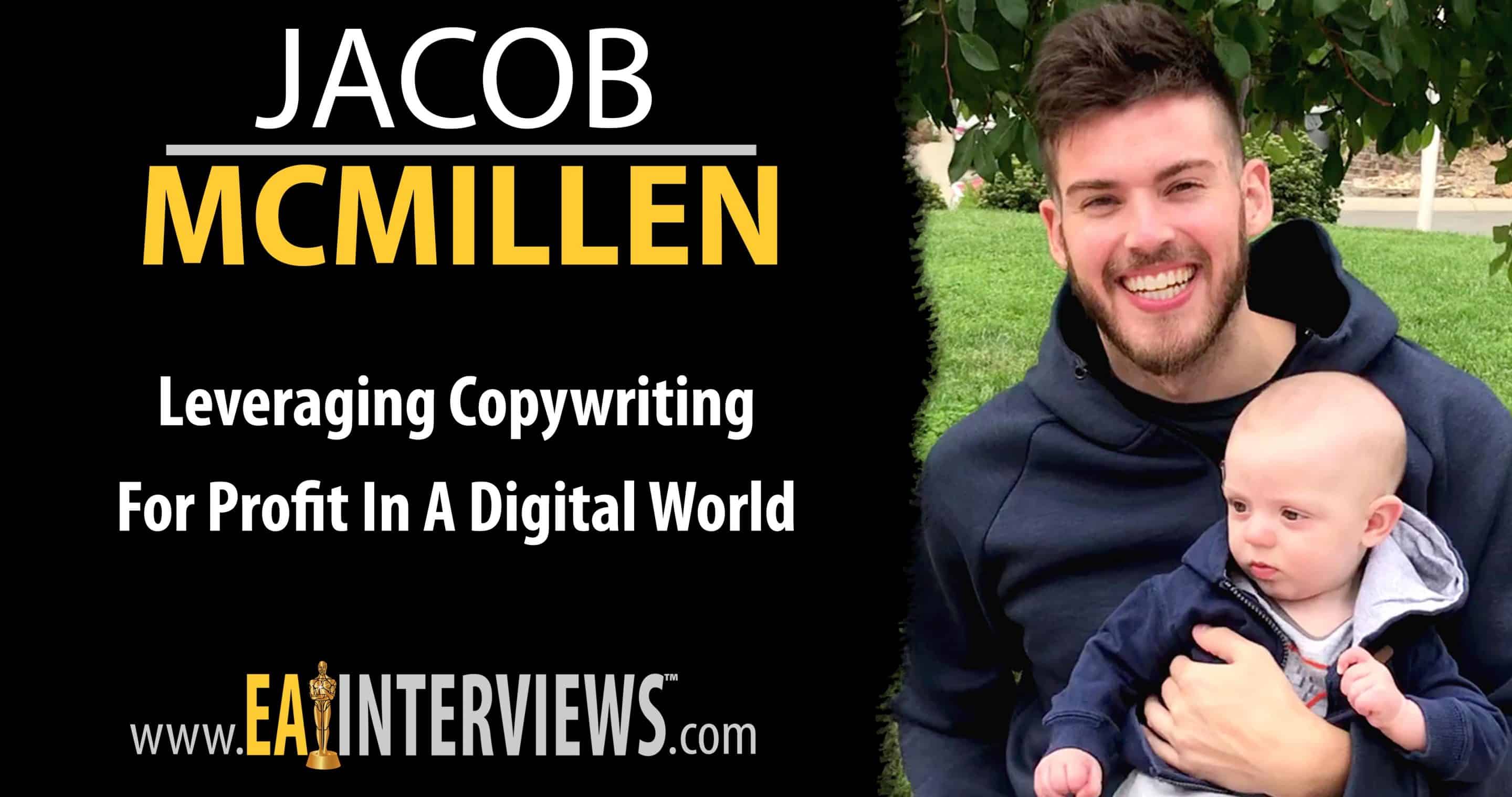 They say it’s best to be the one “selling shovels during a gold rush”. In the last 10 years, e-commerce sales have exploded
from $170 Billion per year to $1.2 Trillion, and every single dollar of that revenue runs through copywriting. Copywriting plays a pivotal role in virtually every lucrative online business model, and as a result, simply offering copywriting as a service has become today’s most reliable business model.

Jacob has discovered this firsthand over an 8 year career that started with selling his Jordans to pay rent and has resulted in
5 consecutive years of six-figure freelancing and the #1 Google search ranking for “copywriter”. He’s used his copywriting earnings to bankroll other businesses, including a $40k/month content agency and a $20k/month education company that has helped thousands of new freelance writers build successful copywriting businesses of their own.

With entire industries going under and millions of people out of jobs they never liked in the first place, Jacob’s on a mission
to help aspiring entrepreneurs discover the pandemic proof skill of copywriting and learn how to trade in their freelance side hustle games for a real, reliable business model.

END_OF_DOCUMENT_TOKEN_TO_BE_REPLACED 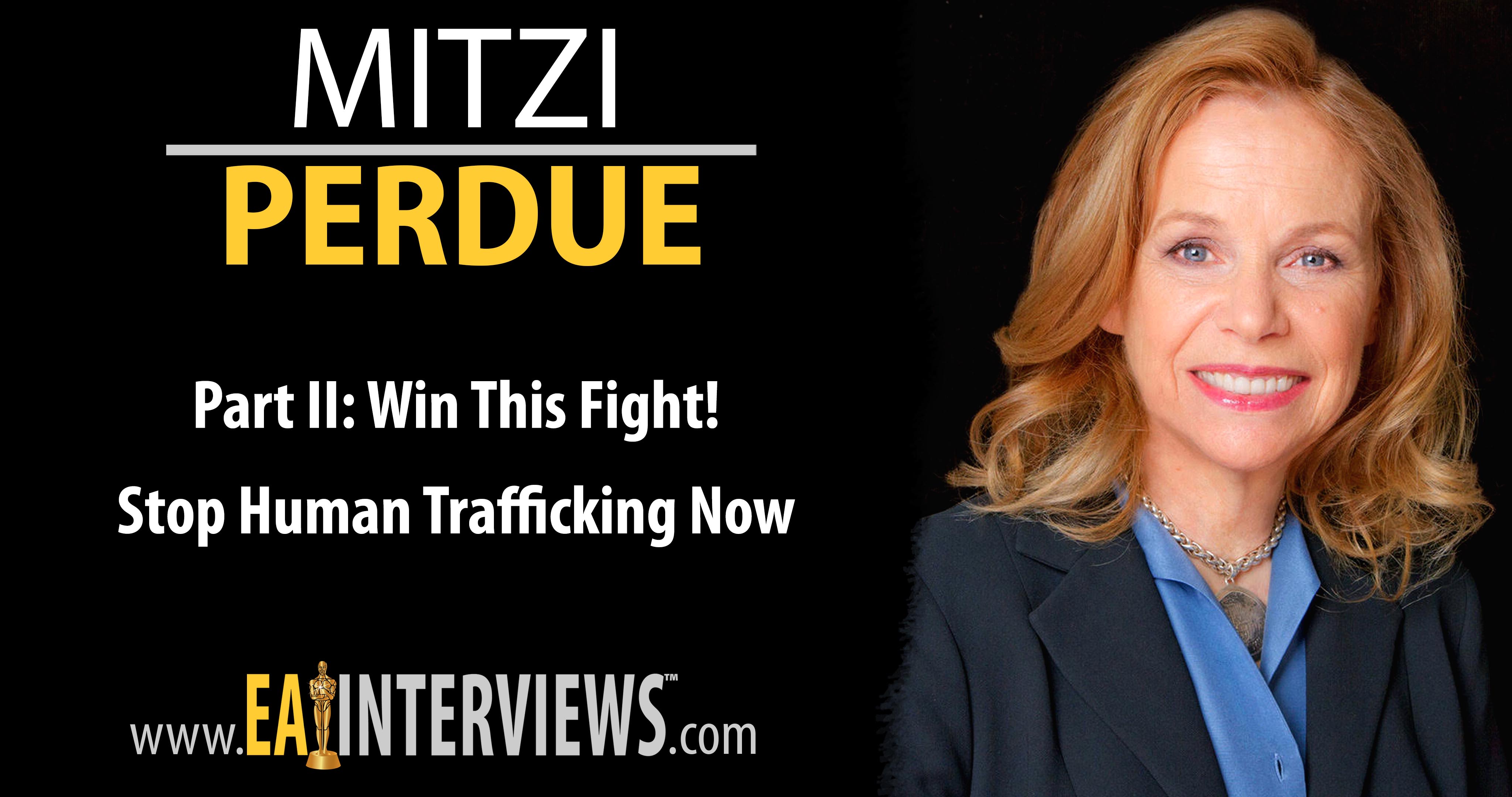 Author, speaker, and businesswoman Mitzi Perdue is a past president of the 40,000-member American Agri-Women.   She’s also a former syndicated columnist for Scripps Howard and her column, The Environment and You, was the most widely-syndicated environmental column in the country.

Her television series, Country Magazine, was syndicated to 76 stations. She’s the founder of CERES Farms, the second-generation family-owned vineyards in California.    If you’ve ever tasted any of the following wines, you may have sampled her grapes! Kendall Jackson, Mondavi, Bogle, Folie a Deux, and Toasted Head. Today she spends her time as part of the global effort to combat human trafficking.  To learn more about her efforts, come to WinThisFight.org, and even better, while there, sign up for her newsletter for inside information on the fight to end human trafficking.

END_OF_DOCUMENT_TOKEN_TO_BE_REPLACED

How to Create and Maintain Strong, Values-Based Cultures in Business with Author, Speaker, Daughter of Sheraton Hotel Co-Founder & Widow of Frank Perdue, the Poultry Magnate Mitzi Perdue on Episode #0239 [ Part I ] 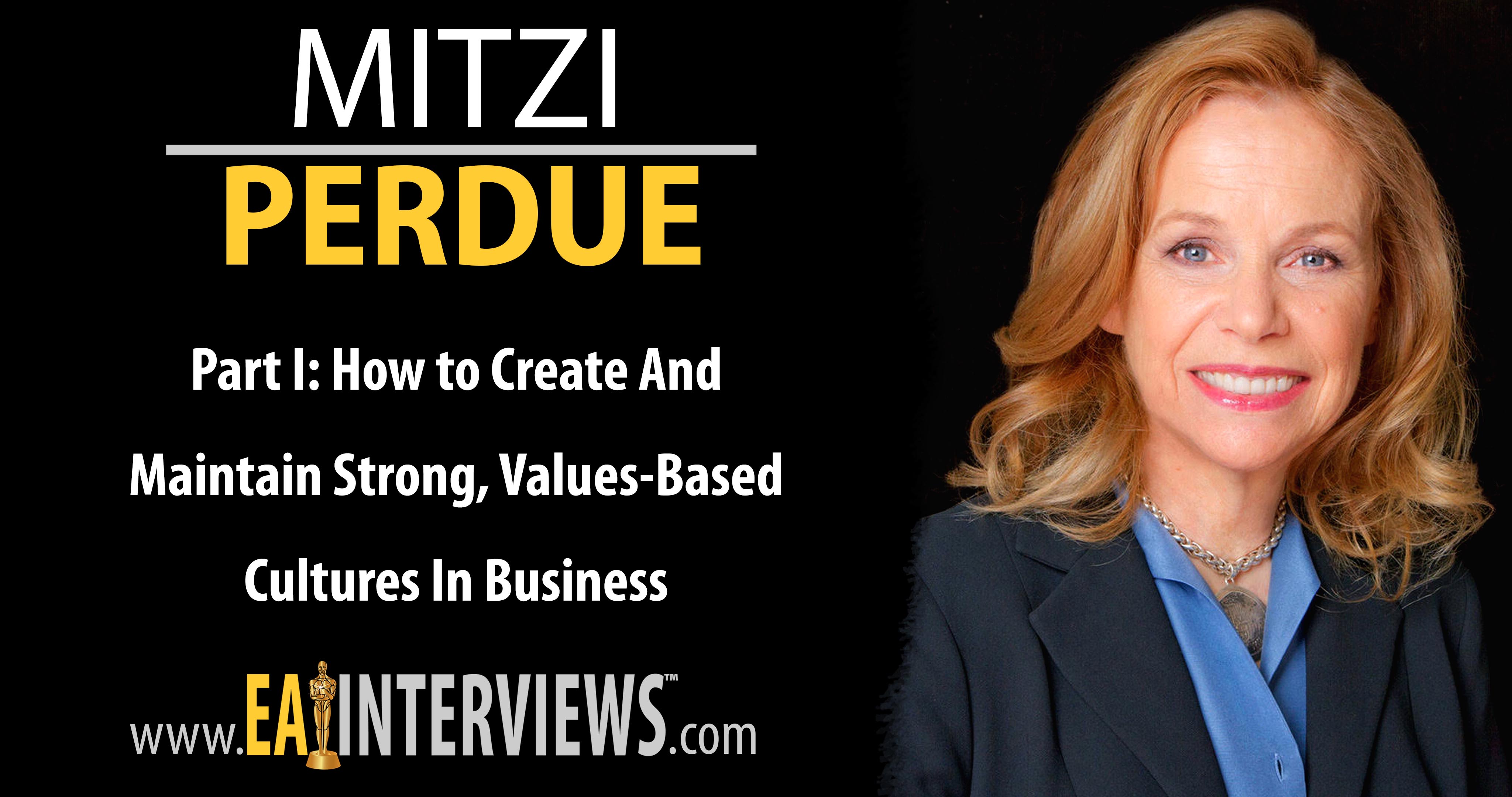 Author, speaker, and businesswoman Mitzi Perdue is a past president of the 40,000-member American Agri-Women.   She’s also a former syndicated columnist for Scripps Howard and her column, The Environment and You, was the most widely-syndicated environmental column in the country.

Her television series, Country Magazine, was syndicated to 76 stations. She’s the founder of CERES Farms, the second-generation family-owned vineyards in California.    If you’ve ever tasted any of the following wines, you may have sampled her grapes! Kendall Jackson, Mondavi, Bogle, Folie a Deux, and Toasted Head. Today she spends her time as part of the global effort to combat human trafficking.  To learn more about her efforts, come to WinThisFight.org, and even better, while there, sign up for her newsletter for inside information on the fight to end human trafficking.

END_OF_DOCUMENT_TOKEN_TO_BE_REPLACED 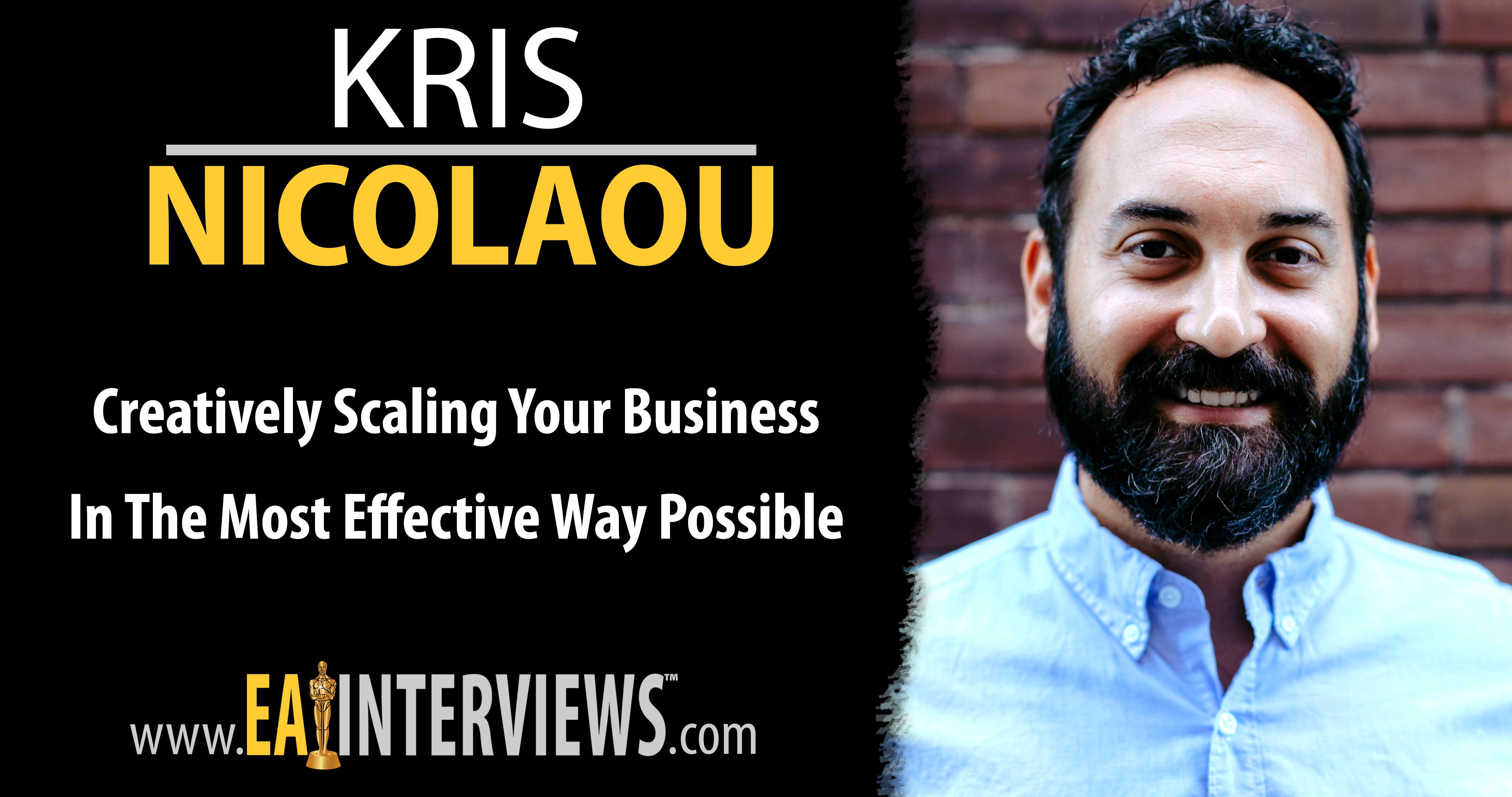 Think of a brain in a box that comes up with creative ways to scale your business in the most effective way possible. That’s what Kris’s company ‘Brain Box’ does. Through an obsession with combining human creativity and smart technology, Kris has designed game changing OpenSource projects including BrainSocket, BrainContainer and BrainCompressor. .
His open collaboration mindset and innovative thinking has helped clients get unstuck and rapidly scale beyond their limits.(One of his clients recently went from $250,000 to $4 million in annual revenue in less than 4 years.) Duplicating what everyone else is doing is a recipe for failure and yet that’s what most agencies do. Kris is on a mission to help companies break through their ‘in-the-box’ limitations in an industry full of cowboys. Yeeeehaaa!
END_OF_DOCUMENT_TOKEN_TO_BE_REPLACED 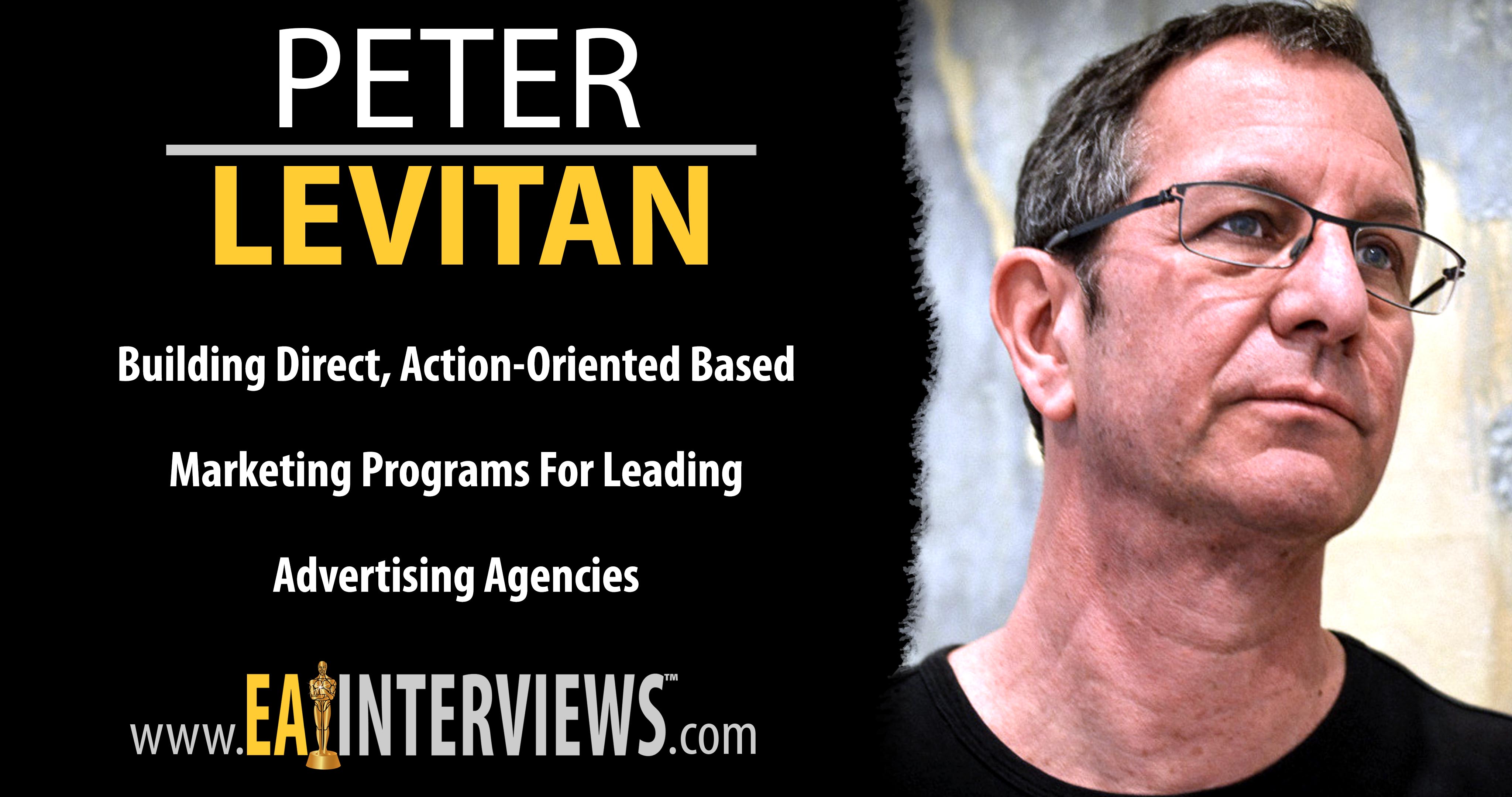 Today’s guest, Peter Levitan is a consultant for advertising, digital, and PR agencies and host of the podcast Advertising Stories. During his 16 years at Saatchi & Saatchi Advertising Worldwide, Peter ran business development across Europe and the US, was EVP Management Director in London and New York, and was GM of the Minneapolis office. Peter has bought and sold three agencies and was CEO and founder of two major Internet startups during the dotcom boom, one of which was sold to Microsoft. Peter now uses his vast experience to counsel and coach agencies across the globe on how to build kick-ass business development programs. He has done this while being a true digital nomad.
END_OF_DOCUMENT_TOKEN_TO_BE_REPLACED 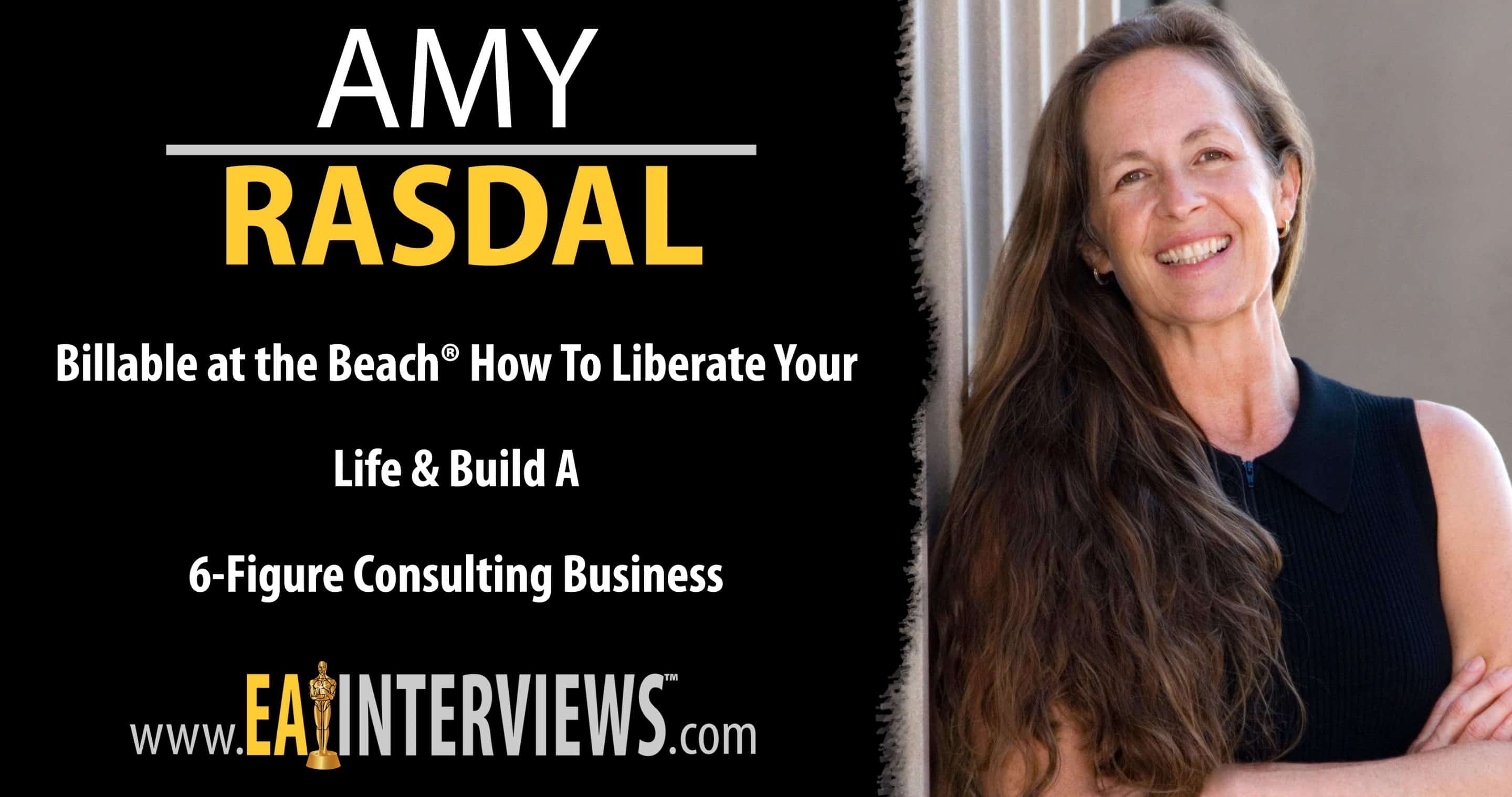 Today’s guest, Amy Rasdal, traded her corporate job for consulting 15 years ago and makes more money than most executives. She works and plays every day. Amy founded Billable at the Beach® to liberate 6-figure earners by helping them
build 6-figure consulting businesses. Amy is passionate about helping others find the freedom and flexibility to live the life of their dreams, without sacrificing the career they’ve spent so long building. Welcome to the show, Amy!
END_OF_DOCUMENT_TOKEN_TO_BE_REPLACED 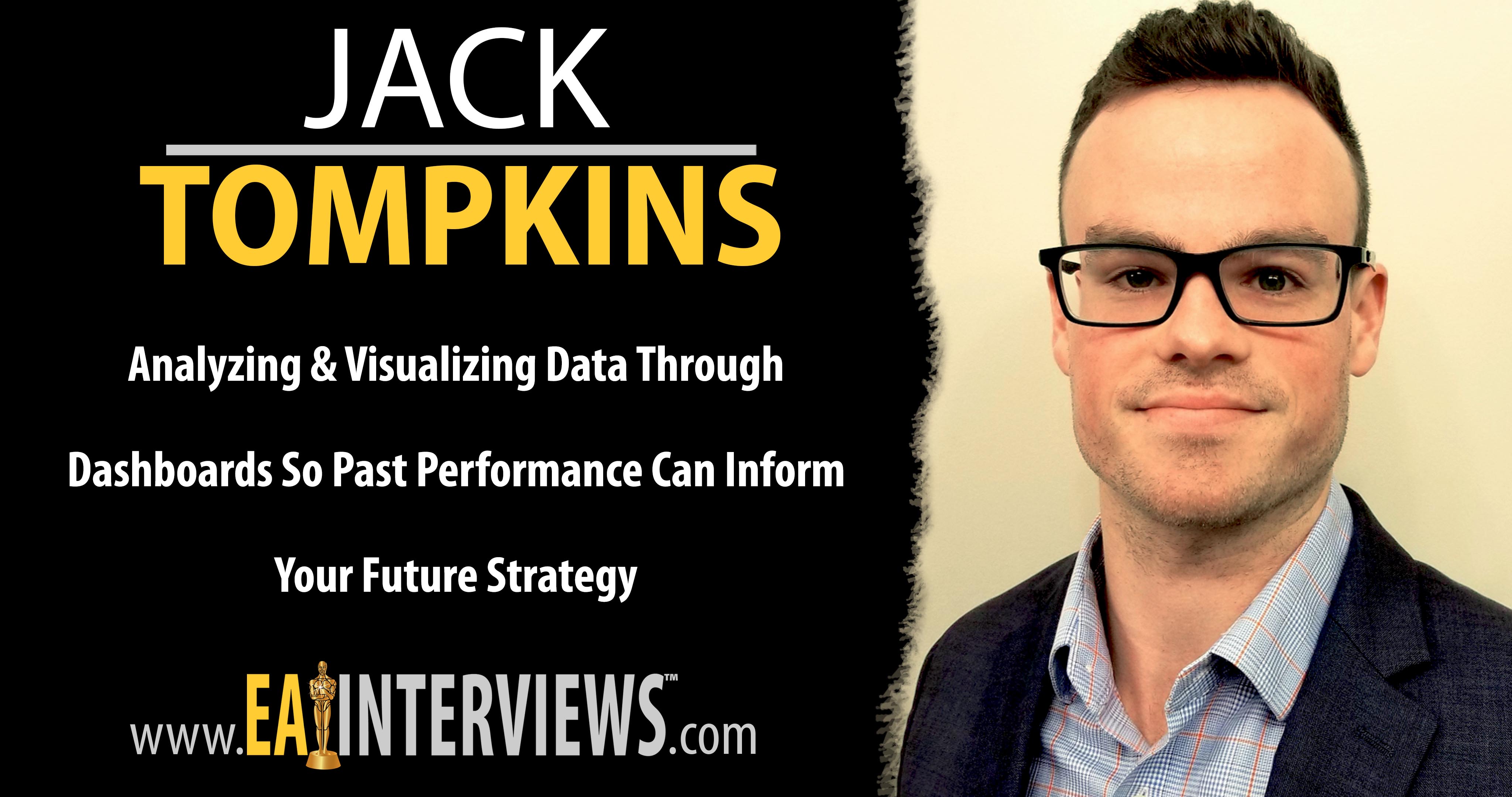 Jack Tompkins is the owner of Pineapple Consulting Firm based out of Charlotte, NC. He helps you analyze and visualize your financial and marketing data in interactive charts, graphs, and dashboards so you don’t have to deal with the annoying data gathering or manipulating of it! His goal is to help you grow profitably and efficiently by helping you not just
know your numbers through and through, but also visualize them to quickly get the full picture.
END_OF_DOCUMENT_TOKEN_TO_BE_REPLACED 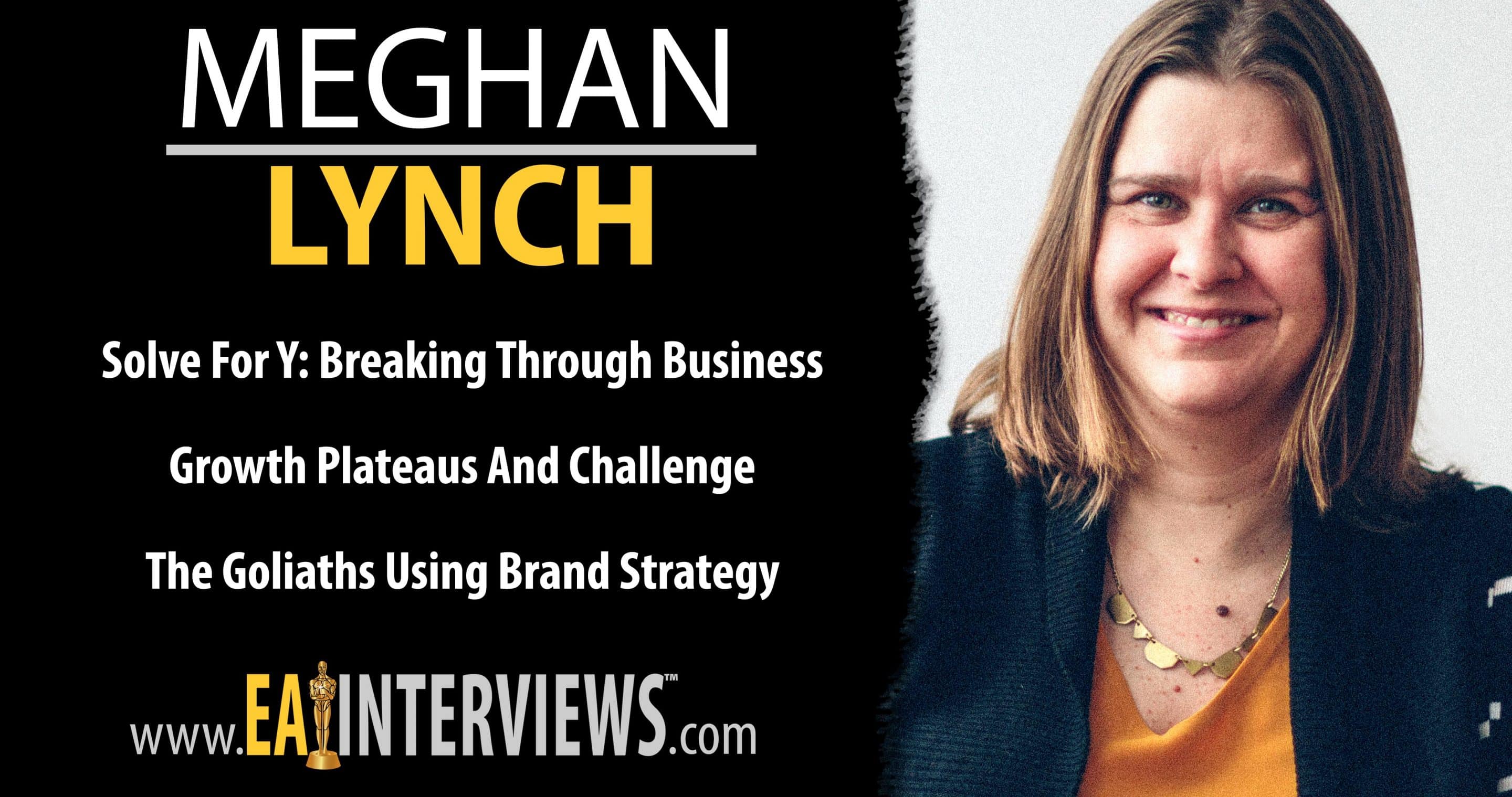 Today’s guest, Meghan Lynch, is the CEO of Six-Point Creative, a brand strategy agency that helps “second-stage” companies break through growth plateaus. As part of her mission to help small businesses challenge the goliaths, Meghan has served as an expert advisor to second-stage clients in a wide range of industries, from fast-casual restaurants to industrial manufacturers. Meghan was named an Enterprising Women of the Year in 2019 and enjoys testing her limits as an endurance runner. Welcome to the show, Meghan!
END_OF_DOCUMENT_TOKEN_TO_BE_REPLACED

The Business Of We: The Proven Three-Step Process For Closing The Gap Between Us And Them In Your Workplace With Author, TEDx Speaker & CEO Laura Kriska on Episode #0289 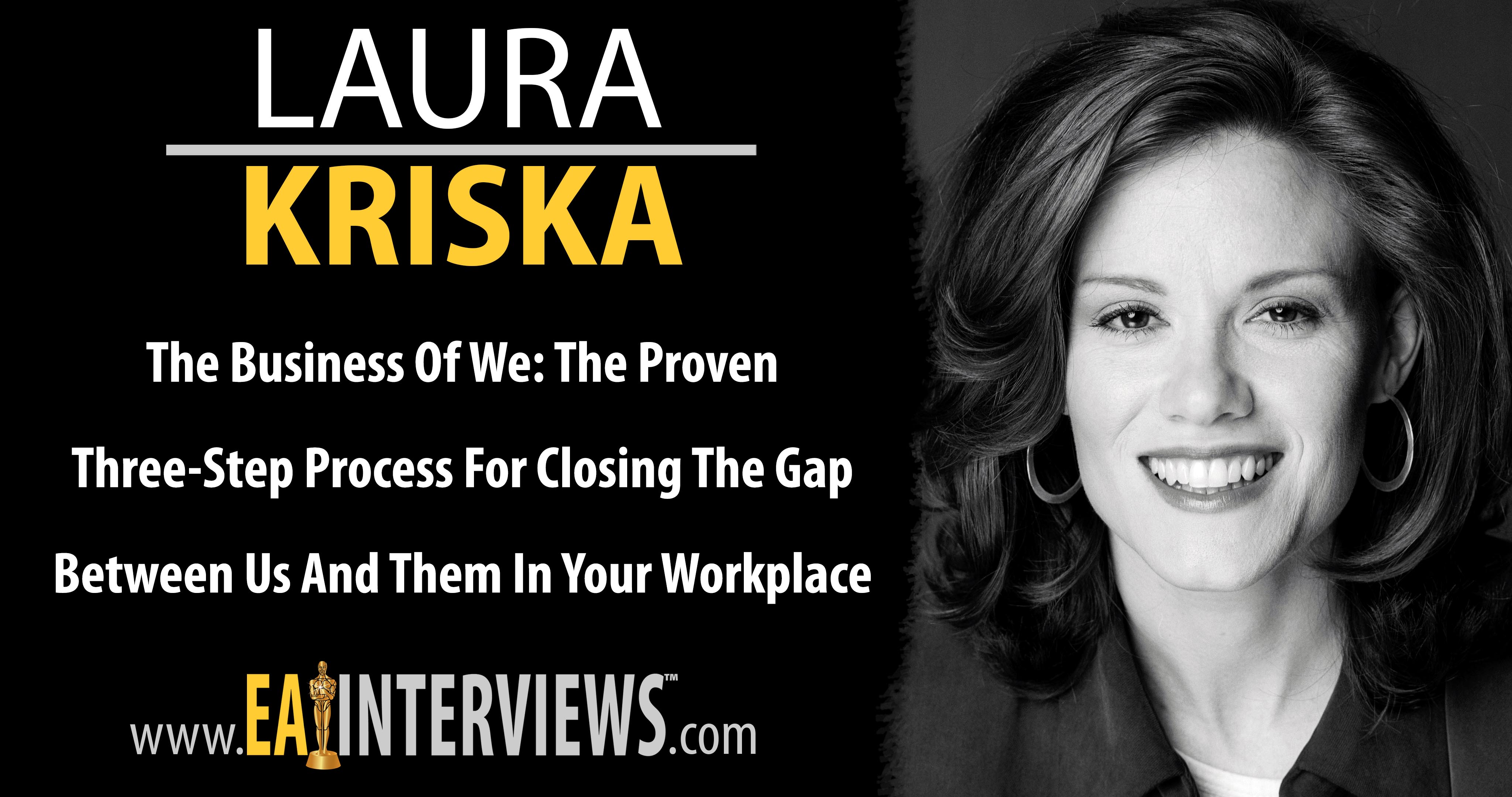 When she was just 22 years old, Laura Kriska became the first American woman to work in the Tokyo headquarters of Honda Motor Company. On her first day, she was asked to trade her cream-colored Liz Claiborne suit for an ugly blue polyester uniform which was the beginning of many ‘us versus them’ rules. Laura quickly learned how to build connections across differences of language, ethnicity, race, and gender to create a WE approach. She then used this approach to permanently change a 50-year-old corporate policy. Her experience working with thousands of middle-aged Japanese men inspired her to write her first book ‘THE ACCIDENTAL OFFICE LADY’ – an insightful, honest, and personal account of a young woman coming of age in corporate Japan. She went on to become a sought after cross-cultural consultant for Fortune 500 companies on four continents, including the 12th largest bank in the world.

Inspired to create a ‘WE building’ revolution, Laura wrote her latest book ‘THE BUSINESS OF WE’ – a new approach to diversity, cultural difference, and inclusion that will increase employee retention and productivity and prevent misunderstandings that lead to lost revenue, lost time and increased legal risk. Her WE-building framework provides practical and actionable insights for creating a more inclusive and productive world. Whether a team is developing a vaccine or increasing the efficiency of an international supply chain, fostering a workplace that is inclusive and respectful of all employees is key to success.

END_OF_DOCUMENT_TOKEN_TO_BE_REPLACED

The 60 Second Sale: The Ultimate System for Building Lifelong Client Relationships in the Blink of an Eye with Sales Expert, Author & CEO Dave Lorenzo on Episode #0288 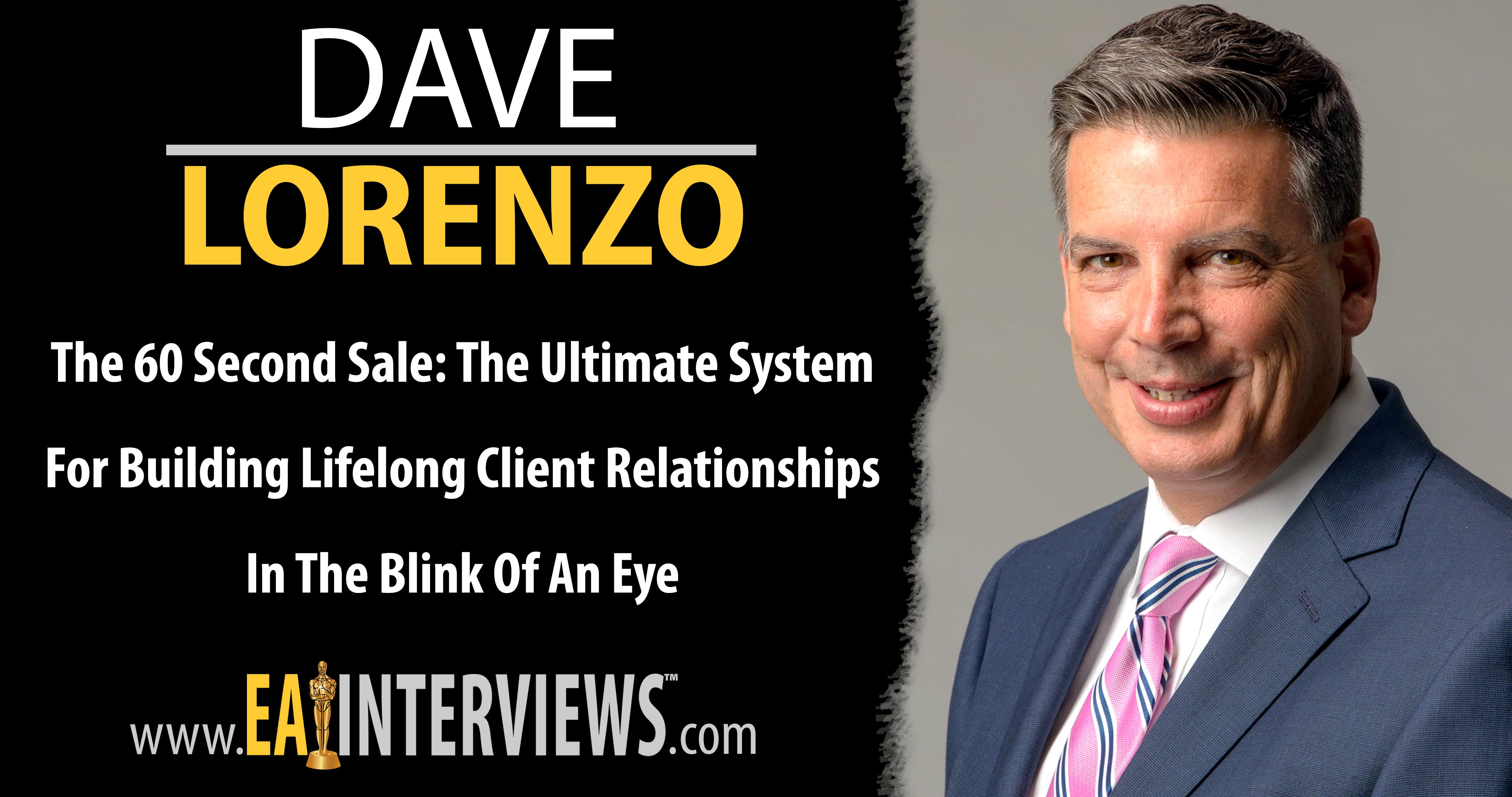 Dave Lorenzo is the guy who can share all the inside business success secrets. Want to close a deal in 60 seconds? Dave’s the guy. Want to open the door to a Fortune 500 CEO, Dave’s the guy. Want to make more money and get home on time for dinner? Dave is definitely the guy.
END_OF_DOCUMENT_TOKEN_TO_BE_REPLACED
« Older Entries
Next Entries » 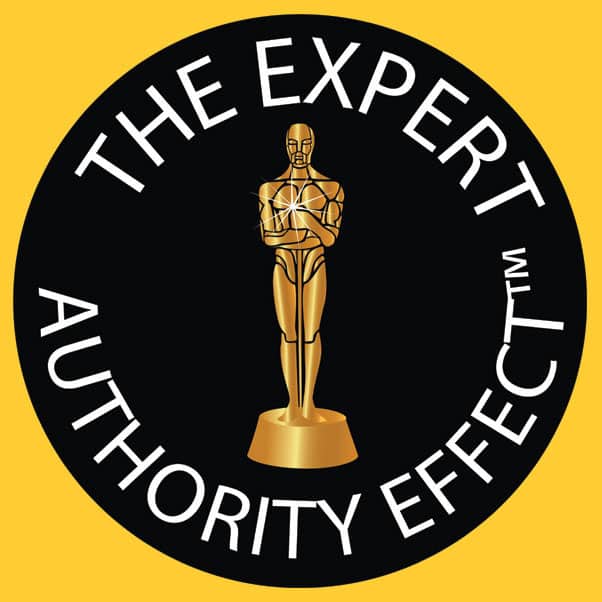 I help people just like you publish and promote lead & profit-generating business books.

You have Successfully Subscribed!